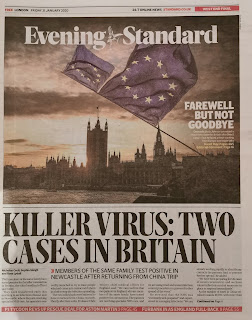 Two people have been confirmed as having coronavirus in the UK.
Professor Chris Whitty, Chief Medical Officer for England, announced the infections this morning and detailed that the pair were members of the same family.

They are being treated in Newcastle, in a high consequence infectious disease unit.

It is reported the infected pair had recently travelled to the UK from China and been staying in a hotel in Yorkshire.
Prof Whitty said: “We can confirm that two patients in England, who are members of the same family, have tested positive for coronavirus. The patients are receiving specialist NHS care, and we are using tried and tested infection control procedures to prevent further spread of the virus.
“The NHS is extremely well-prepared and used to managing infections and we are already working rapidly to identify any contacts the patients had, to prevent further spread." 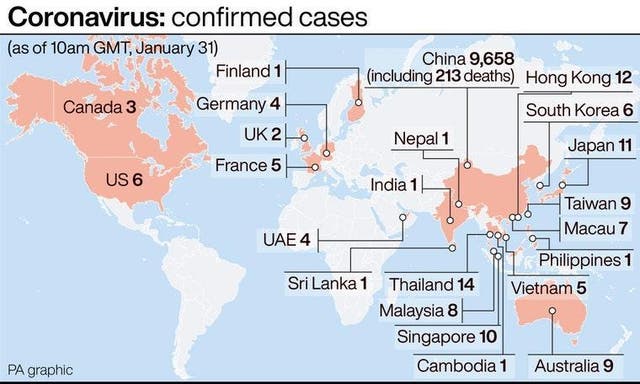 The Department of Health said 177 tests for coronavirus have now been conducted, with 175 coming back negative and two confirmed positive, as of Friday.

Prof Whitty, alongside the infection announcement, said: “We have been preparing for UK cases of novel coronavirus and we have robust infection control measures in place to respond immediately. We are continuing to work closely with the World Health Organization and the international community as the outbreak in China develops to ensure we are ready for all eventualities.”
The two cases are not linked to the repatriation flight and Prof Whitty said they did not increase the risk in the UK, which had already been raised to “moderate”. The risk, he added, is if the situation in China gets “out of control”.

The mortality rate of the coronavirus appears to be around two per cent, far lower than ebola, and mainly affecting older people with underlying medical conditions. But Prof Whitty added: “If we got very large numbers ,that is obviously a concern and something we would have to take seriously.”

Sharon Peacock, director for national infection service at Public Health England Professor, said: “We were able to stand up an outbreak investigation team immediately and that team is working now, and what they’ll be doing is aiming to contact everybody who has been in contact with these two cases and prevent onward transmission.”In a bid to prevent the illness spreading an outbreak investigation team has been formed, to trace anyone who has been in contact with the pair.

The announcement came as 83 British nationals who were trapped at the epicentre of the coronavirus outbreak in China were returning to the UK. Their plane left Wuhan, where the deadly illness is believed to have originated, on Thursday night and they landed at RAF Brize Norton in Oxfordshire shortly after 1.30pm on Friday.

They will now be transported to a quarantine centre in the Wirral, where they will stay for 14 days.

There is no indication the coronavirus case is any of the passengers on the plane.

On Friday morning Chinese health officials said the death toll in the country from the virus had risen to 213, up from 170 a day earlier.

No deaths have occurred outside China.

However, at least 82 cases had been confirmed across 18 different countries ahead of the announcement of the infection in the UK.


Prior to this, the UK's four chief medical officers raised the risk level of the illness from low to moderate.

The body declared the virus a "Public Health Emergency of International Concern" which is defined as an "extraordinary event which is determined to constitute a public health risk... through the international spread of disease and to potentially require a coordinated international response".

Dr Michael Head, senior research fellow in global health at the University of Southampton, said: “Hopefully, as seen elsewhere, the case numbers will be very limited. The key concern will be if there is significant human-to-human transmission.”

More than 1,400 people are believed to have returned to the UK from Wuhan since January 10 and health officials have been seeking to trace them.

Official advice was extended for people to self-isolate for 14 days if they had returned from Wuhan, to now apply to all people who had come back from mainland China and were displaying coronavirus symptoms, which are similar to flu.​

There are four hospitals in England equipped to handle the patients — Guy’s and St Thomas’ and the Royal Free in London, the Royal Liverpool and Newcastle-upon-Tyne Hospital. On Wednesday night, an apartment-hotel in Yorkshire was put on lockdown when a man, understood to be a Chinese national, was taken to hospital after falling ill.