December 31, 2020
1 December
MPs vote 291–78 in favour of introducing England's new COVID-19 tier system with the The Health Protection (Coronavirus, Restrictions) (All Tiers) (England) Regulations 2020, with 55 backbench Conservatives voting against the government, while another 16 abstain.
Debenhams stores are set to close with the loss of 12,000 jobs after attempts to find a buyer for the retailer fell through when JD Sports pulled out.
2 December
The UK becomes the first country to approve the new Pfizer/BioNTech vaccine. 800,000 doses are planned for arrival in the coming days, with a further 40 million in 2021, enough to vaccinate 20 million people. The BBC reports that the jab is "the fastest vaccine to go from concept to reality, taking only 10 months to follow the same steps that normally span 10 years."
3 December
Four people are killed after a large explosion at a waste water treatment works in Avonmouth, Bristol.
The first batch of the Pfizer/BioNTech vaccine arrives in the UK, and is stored at an undisclosed location ready for distribution to hospitals vaccination centres around the country.
4 December
Liverpool mayor Joe Anderson is arrested, along with four others, on suspicion of conspiracy to commit bribery and witness intimidation, related to the awarding of building contracts in the city. 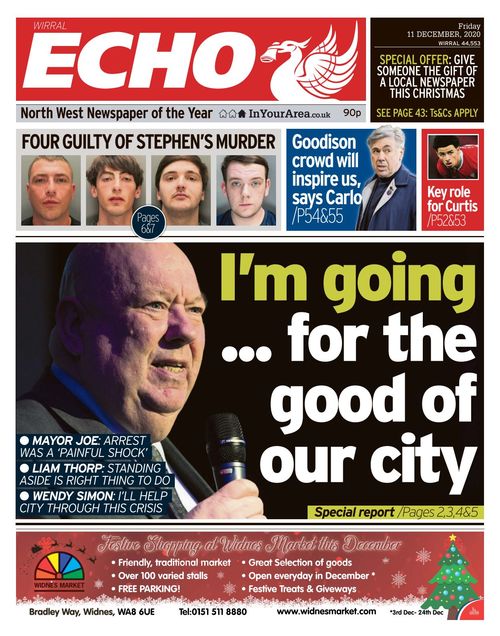 7 December
MPs vote by 357 to 268, a majority of 89, to reinstate controversial sections of the Internal Market Bill linked to the Northern Ireland protocol, which the EU continues to oppose.
8 December
A 90-year-old British woman, Margaret Keenan, becomes the first person in the world to receive the Pfizer/BioNTech COVID-19 jab as part of a mass vaccination programme. The injection of BNT162b2 is the first of 800,000 doses to be offered to people in the UK, with millions more expected to be ready by 31 December.
14 December
Matt Hancock tells MPs that a new variant of COVID-19 (Variant of Concern 202012/01) has been identified that is spreading faster in some areas of the country.The variant shows changes to the spike protein which could make the virus more infectious.

16 December
London is one of several areas in the South East of England placed into tier 3 of the country's COVID-19 tier system, following a sharp rise of infections in the capital.
The Supreme Court overrules the Court of Appeal ban on the development of a third runway at Heathrow Airport, allowing a planning application to go ahead.
18 December
The New and Emerging Respiratory Virus Threats Advisory Group and the government are informed of evidence of increased transmissibility of the SARS-CoV-2 Variant of Concern 202012/01.

19 December
Boris Johnson announces a new 'tier 4' lockdown for London and much of South East England from midnight, as Variant of Concern 202012/01 is identified with a 70% higher transmission rate.
Nicola Sturgeon announces "firm preventative action" – a ban on travel to the rest of the UK over the festive period; the relaxation of rules on meeting households indoors to only apply on Christmas Day; all of mainland Scotland moving into the toughest level four from 26 December; and schools returning later than originally planned after the Christmas holidays.
20 December
Austria, Belgium, Bulgaria, France, Germany, Ireland, Italy and the Netherlands announce the banning of flights from the UK, in response to SARS-CoV-2 Variant of Concern 202012/01.
A new record high daily case figure is reported, with 35,928 new infections, double the number of the previous Sunday.
France announces it will stop freight lorry movements from the UK for 48 hours because of the spread of Variant of Concern 202012/01 of SARS-CoV-2 in the UK.
21 December
The number of countries halting travel from the UK exceeds 40.
22 December
The UK and France reach an agreement to reopen their border the following day, allowing freight drivers and EU citizens to travel between the two countries, subject to a recent negative COVID-19 test.
Tesco reintroduces a purchasing limit on some items, including eggs, rice, soap and toilet rolls to ensure there is not a shortage of products due to panic buying.
A new mineral, dark green in colour and named kernowite, is discovered in Cornwall (Cornish: Kernow).
23 December
Another record high daily case figure is reported, with 39,237 new infections.
Tier 4 restrictions are announced for more areas in England from Boxing Day.
A new highly infectious strain, originating from South Africa, is confirmed to be present in London and the North West of England.
24 December
The government suspends travel from South Africa.
The UK and the European Union agree to a free trade agreement prior to the end of the transition period.
25 December
The United States becomes the latest country to impose travel restrictions on the UK in response to SARS-CoV-2 Variant of Concern 202012/01, forcing all passengers travelling to the US to produce a negative COVID-19 test before being allowed to travel.
Following her traditional address to the nation, Channel 4 airs a deepfake video of the Queen's speech, to offer "a stark warning about the advanced technology that is enabling the proliferation of misinformation and fake news in a digital age."