August 30, 2020
1 August
The BBC ends free television licensing for the over-75s.
An unnamed Conservative MP and former minister, described as a man in his 50s, is arrested on suspicion of rape. As he has not had the whip withdrawn by the party, he can continue to represent them. 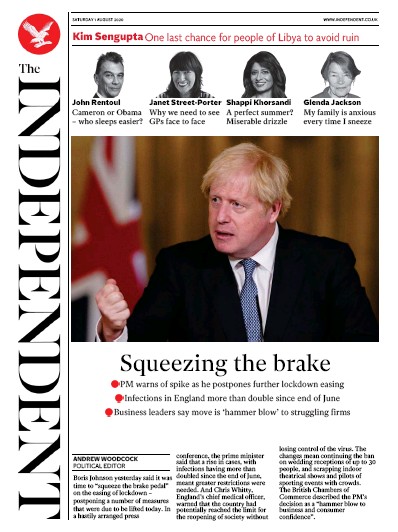 2 August
A major incident was declared in Greater Manchester after rises in coronavirus infection rates. 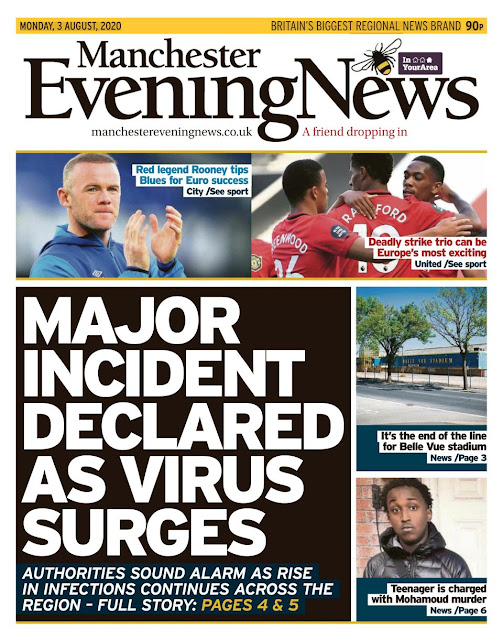 3 August
The Government’s Eat Out to Help Out Scheme begins as previously announced by the Chancellor of the Exchequer, Rishi Sunak in the July 2020 United Kingdom summer statement, and runs from the 3rd August till the 31st of August. 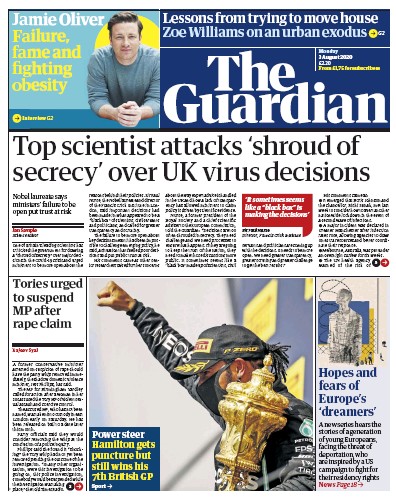 7 August
The UK has its hottest August day in 17 years, with temperatures surpassing 36 °C in south-east England. 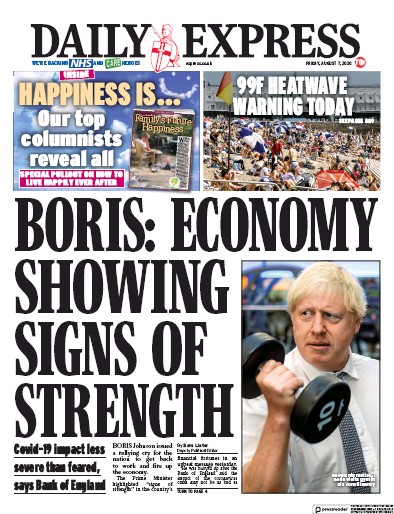 12 August
The Office for National Statistics reports that Britain's gross domestic product (GDP) fell by 20.4% in the second quarter of 2020, the biggest quarterly decline since records began in 1955, and the worst economic figure of any G7 nation.
The death count for England was reduced by more than 5,000 to 41,329. Previously, people in England who died at any point following a positive test, regardless of cause, were counted in the figures. However, the other UK nations had a cut-off period of 28 days.
Stonehaven derailment: A train derailment kills three people near Stonehaven in Aberdeenshire, caused by heavy rain triggering a landslide. 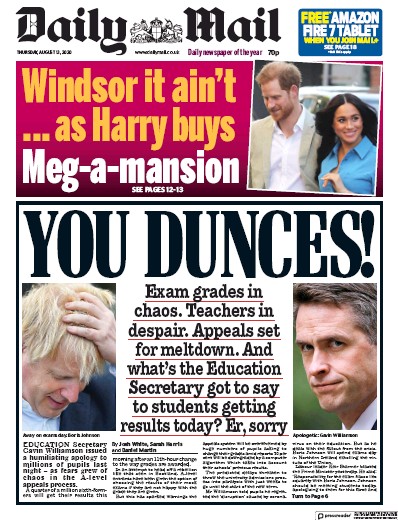 13 August
A-level results are published in England, Northern Ireland and Wales. This year's exams were cancelled due to the COVID-19 epidemic, so results were instead calculated using predictions submitted by teachers, called centre assessed grades (CAGs). The predictions were then moderated by the regulator, Ofqual, using an algorithm designed to eliminate grade inflation. This gave an overall pass rate 0.7% higher than in 2019, with more students being accepted for their first choice university course than in that year. Following concerns that 39% of results predicted by teachers in England were downgraded by the moderation process, Ofqual accuses some teachers of submitting "implausibly high" predictions. University data shows that 79% of the 2019 university intake did not achieve their predicted grades in exams.
14 August
Thousands of UK holidaymakers in France were rushing to the borders to the UK, following the announcement of anyone returning from France after 4 am on 15 August to self-isolate for fourteen days, causing massive queues and traffic jams at the harbours and Eurotunnel.
17 August
In a reversal of the previous government decision, A-levels and GCSE grades in England will be based on unmoderated teacher predictions.
Similar reversals also take place in Wales and Northern Ireland.
Banks Mining closes a major opencast coal site, Bradley mine, near Dipton, County Durham. 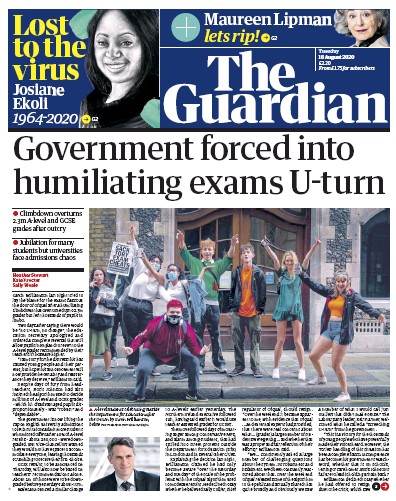 20 August
22-year-old Hashem Abedi is jailed for a minimum of 55 years for his part in the Manchester Arena bombing.
A report by the Nuclear Decommissioning Authority advises that the Dounreay nuclear site will take until the year 2333 to be safe for reuse. 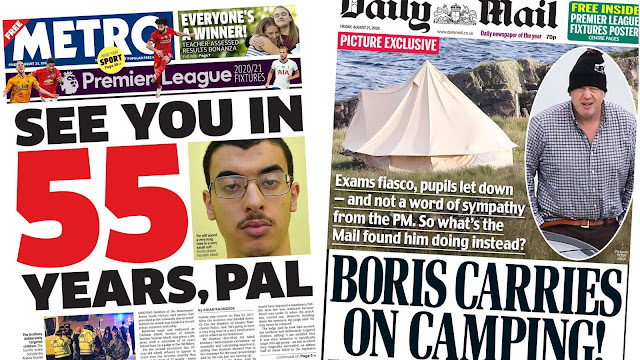 21 August
UK government debt is reported to be over £2 trillion for the first time. This also marks the first time the debt-to-GDP ratio has exceeded 100% since the 1960–61 financial year. 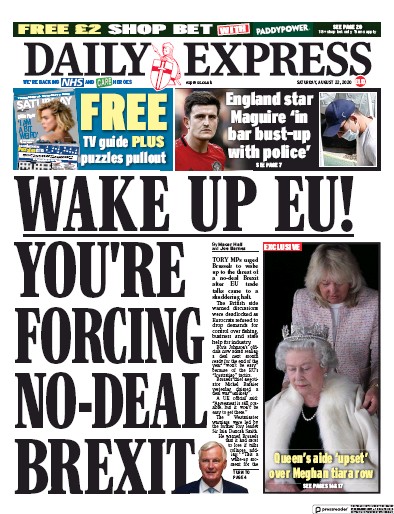 25 August
Scientists identify the earliest person known to have been infected by the SARS-CoV-2 in the UK; a 75-year-old woman from Nottinghamshire, who tested positive on 21 February. 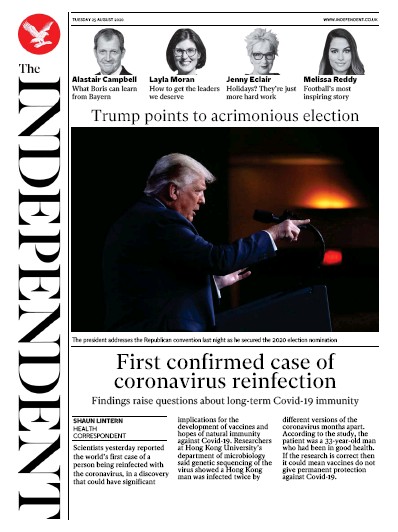 26 August
A disastrous fall in wheat production is reported due to extreme weather, with yields expected to be 40% lower, the worst British harvest in 40 years.
27 August
Sir Ed Davey is selected as the next leader of the Liberal Democrats, with 63.5% of votes, compared to 36.5% for Layla Moran.
There are above 1,500 positive tests for SARS-CoV-2 in a day – the daily highest figure since mid-June, after trending back upwards in recent weeks. A key factor is likely to be the increase in the number of people being tested.
28 August
Shortly before the reopening of schools at full capacity in England, Wales and Northern Ireland, New Scientist examined the three-month history of the test and trace system. The magazine noted that the system had not met its targets and had been affected by an Internet outage in Southampton in the second week of August, affecting contact tracing for several thousand people. It criticised both the lack of a backup for such a vital system and the lack of transparency. 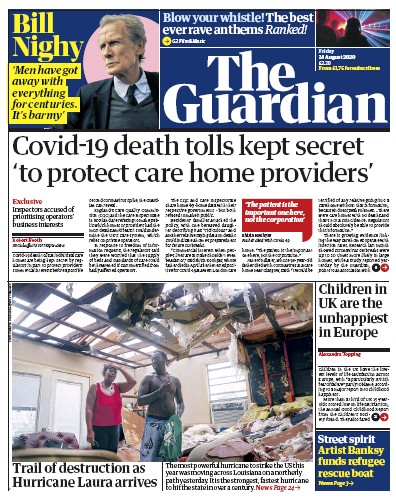