June 30, 2020
1 June
Some primary schools in England reopen to more pupils from Reception, Year One and Year Six, with head teachers reporting "highly variable" levels of attendance ranging from 40 to 70%.

2 June
The Guardian calculated death toll from COVID-19 is 50,032. Meanwhile, Reuters give the figure as 49,646.
Public Health England releases its "Disparities in the risk and outcomes of COVID-19" report, finding that age, gender, health and ethnicity are significant factors in determining the outcome following COVID-19 infection.

"Black Out Tuesday" is held to highlight racial injustice and anti-racism in response to the killing of George Floyd. 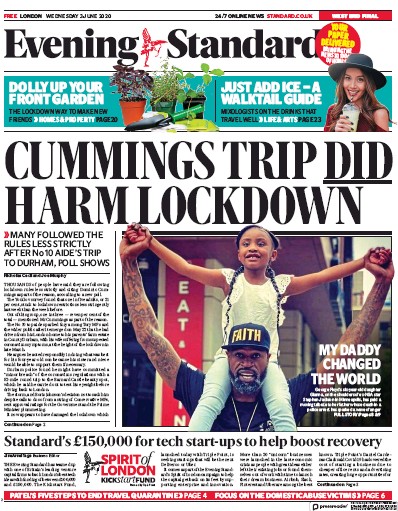 3 June
Home Secretary Priti Patel confirms plans to force almost all arrivals to the UK to self-isolate for 14 days from 8 June, and warns that failure to adhere to quarantine conditions in England could result in a £1,000 fine or prosecution.
Business Secretary Alok Sharma, after sweating profusely during a statement to the Commons self-isolates at home, but tests negative for COVID-19 a day later.

A significant increase in sleep problems among the British population is reported by King's College London researchers, attributed to the ongoing effects of the lockdown.
4 June
Transport Secretary Grant Shapps announces that wearing face coverings will be made compulsory on public transport in England from 15 June.

5 June
The BBC announces Tim Davie as its new Director-General, effective from 1 September 2020.

6 June
Thousands turn out for continued anti-racism protests across the UK in London, Manchester, Cardiff, Leicester and Sheffield following the killing of George Floyd, despite calls from Health Secretary Matt Hancock for people not to attend mass demonstrations in breach of lockdown rules.
7 June
A statue of 17th century merchant, slave trader, MP and philanthropist Edward Colston is pulled down by anti-racism protesters in Bristol.

Prime Minister Boris Johnson acknowledges the "undeniable feeling of injustice" motivating anti-racism protests caused by the killing of George Floyd, but urges the country to "work peacefully, lawfully" to defeat racism and discrimination, and condemns those who have flouted social distancing rules to attend them during a time of "national trial". 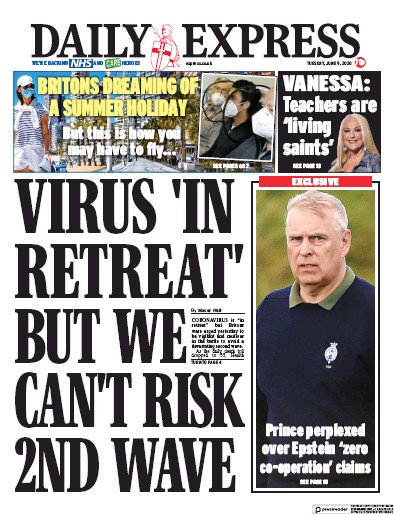 Education Secretary Gavin Williamson drops plans for all primary school children in England to return to school before the end of the summer term.

Figures released by the Treasury show that 8.9 million workers are now covered by the Coronavirus Job Retention Scheme, more than a quarter of the British workforce, costing £19.6bn to date.

A statue of slave owner Robert Milligan is removed from outside the Museum of London Docklands, after mayor Sadiq Khan announces a review of all of London's statues and street names, saying any with links to slavery "should be taken down".

10 June
The OECD says the British economy is likely to be the hardest-hit by COVID-19 among developed countries, with a projected economic slump of 11.5% in 2020.

11 June
Figures from the Department of Health show that in NHS England's NHS Test and Trace's first week of operation, 31,700 contacts were identified, of whom 26,900 (85%) were reached and asked to self-isolate.

Centrica, the owner of British Gas, announces plans to cut 5,000 jobs by the end of 2020 in order to "arrest the decline" of the company.

12 June
Figures released by the Office for National Statistics show that the British economy shrunk by 20.4% in April, the largest monthly contraction on record.
13 June
Large crowds, including far-right protesters, clash with police in central London, in response to recent anti-racism rallies and the tearing down of statues.

15 June
Long queues of shoppers are reported across England as all non-essential retailers are allowed to reopen.
Face coverings become mandatory on public transport in England.
A man who was pictured urinating next to a Parliament Square memorial dedicated to PC Keith Palmer, is sentenced to 14 days in prison for outraging public decency.

Boris Johnson announces plans to create a cross-government commission to examine racial inequality and the disparities experienced by minority ethnic groups in education, health and the criminal justice system.

16 June
Boris Johnson announces the merging of the Department for International Development with the Foreign and Commonwealth Office to create the Foreign, Commonwealth and Development Office.
The University of Oxford reports that a major trial of dexamethasone – a cheap, widely available corticosteroid medication – shows it can significantly reduce mortality in COVID-19 patients.

19 June
The UK's epidemic alert level is downgraded from four to three, meaning the virus remains in general circulation but transmission is no longer "high or rising exponentially."

23 June
Prime Minister Boris Johnson announces an easing of the two-metre rule in England in favour of a “1-metre-plus” approach so two different households will be able to eat, drink or dine together from 4 July as long as they stick to physical-distancing guidelines. Households will also be able to visit each other which includes staying overnight.
24 June
22 police officers are injured and their vehicles damaged after breaking up an "unlicensed music event" in Brixton. Four people are arrested.

25 June
A major incident is declared by Bournemouth, Christchurch and Poole Council after thousands of people arrive on beaches and other stretches of the Dorset coast, ignoring requests to stay away.

Rebecca Long-Bailey is sacked from the Shadow Cabinet after sharing an article on Twitter that "contained an antisemitic conspiracy theory."

The UK experiences its hottest day of the year so far, with temperatures reaching as high as 33.3 °C (92 °F).
26 June
Jonty Bravery, 18, is jailed for 15 years after throwing a six-year-old boy off a 200 ft balcony at London's Tate Modern gallery, leaving him with a bleed to the brain and life-changing injuries.

Shopping centre owner Intu, whose portfolio includes Merry Hill in the West Midlands and the Trafford Centre in Manchester, falls into administration after failing to secure an agreement with its creditors. 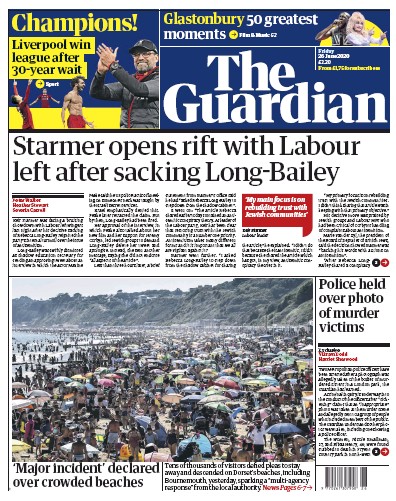 29 June
Following a spike in COVID-19 cases in Leicester, the UK's first full local lockdown is introduced in the city, with non-essential retailers told to shut from the following day and schools told to close from 2 July. 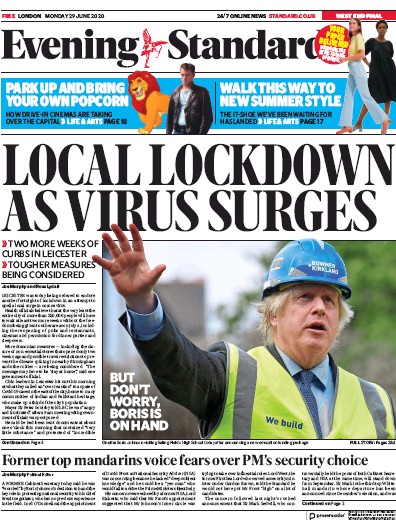 30 June
The British government announces that rental e-scooters in the UK will be made legal from 4 July as an alternative which promotes social distancing compared to public mass transport, while privately owned e-scooters will remain illegal. This will be a rapid acceleration to a plan, first announced in March where scooters would be allowed in only four "future transport zones": Portsmouth and Southampton, the West of England Combined Authority (WECA), Derby and Nottingham, and the West Midlands