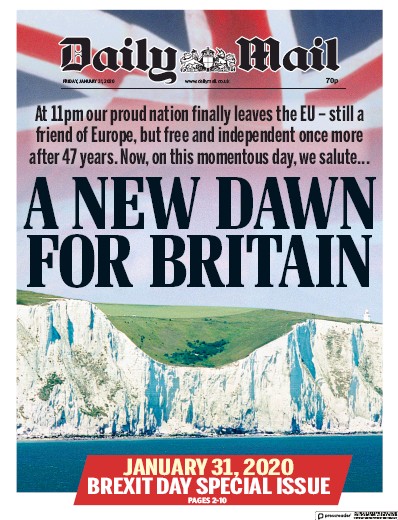 4 January
The Foreign Office warns British nationals against all but essential travel to Iran and Iraq, following a US airstrike in Baghdad the previous day in which Iranian general Qasem Soleimani was killed. 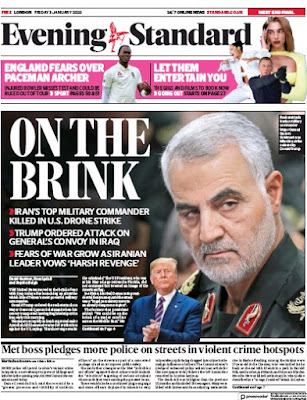 5 January
Boris Johnson says "we will not lament" Qasem Soleimani's death as he calls for "de-escalation from all sides".
6 January
Downing Street states that Britain will not support U.S. President Donald Trump's threat to bomb Iranian cultural and heritage sites.
7 January
The Labour Party leadership election formally begins, with the new leader scheduled to be announced on 4 April.
8 January
Prince Harry and Meghan, the Duke and Duchess of Sussex, announce that they plan to "step back as senior members" of Britain's royal family, and divide their time between the UK and North America. 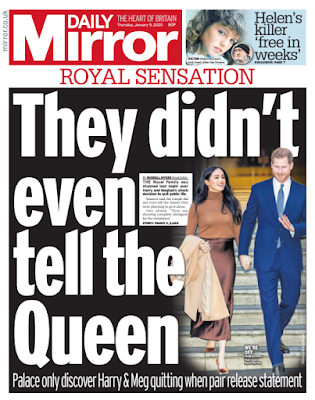 9 January
The UK and Irish governments publish a deal aimed at restoring the Northern Ireland Executive; the Democratic Unionist Party gives its backing to the agreement.
The House of Commons gives its third and final backing to the Withdrawal Agreement Bill, voting 330 to 231 in favour; the bill now passes to the House of Lords for scrutiny.
10 January
Sinn Féin gives its backing to a deal to restore power-sharing government to Northern Ireland for the first time since 2017.
11 January
The Northern Ireland Assembly reconvenes after a three-year hiatus; DUP leader Arlene Foster is appointed Northern Ireland's first minister, while Sinn Féin's Michelle O'Neill is appointed deputy first minister.
Robert Macaire, the British ambassador to Iran, is detained in Iran after attending a vigil for those killed on Ukraine International Airlines Flight 752. He is summoned to appear at Iran's foreign ministry the following day, for being "an unknown foreigner in an illegal gathering".
22 January
Boris Johnson's EU withdrawal deal successfully completes its passage through parliament, with the EU Withdrawal Agreement Bill being voted through without change, after several amendments proposed by the House of Lords are rejected.
23 January
Parliamentary ratification of Boris Johnson's EU withdrawal deal is completed with Royal Assent being given to the EU Withdrawal Agreement Bill.
Prince Charles ignores and walks past U.S. Vice President Mike Pence without shaking his hand at the World Holocaust Forum in Jerusalem.
31 January
The United Kingdom and Gibraltar leave the European Union, beginning an 11-month transition period, during which they remain in the Single Market and Customs Union.
The BBC and ITV main news bulletins choose not to broadcast in its entirety a three-minute speech recorded by Prime Minister Boris Johnson scheduled for 10pm, an hour before Brexit.