November 30, 2020
3 November
The UK terror threat level is raised from "substantial" to "severe", following recent Islamist attacks in France and Austria.
5 November
Chancellor of the Exchequer Rishi Sunak extends the government's furlough scheme to the end of March 2021.
Dominic Chappell, the former owner of BHS, is sentenced to six years in jail for tax evasion.
7 November
The Scottish Government and the British Government impose a ban on non-British citizens arriving from Denmark after a new SARS-CoV-2 variant, Cluster 5, being spread from mink to humans in mink farms.
Boris Johnson congratulates Joe Biden on being elected President of the United States, saying: "The US is our most important ally and I look forward to working closely together on our shared priorities, from climate change to trade and security."
9 November
The House of Lords votes by 433 to 165 to remove a section of the Internal Market Bill which allowed the government to break international law.
10 November
A record high level of redundancies is reported by the ONS, with about 314,000 people made redundant in the three months to September, more than during the peak of the Great Recession.
Following the first successful phase III trial of a COVID-19 vaccine, Health Secretary Matt Hancock states that the NHS is ready to start providing doses in the UK "as fast as safely possible", with a mass roll-out expected "in the first part of next year". 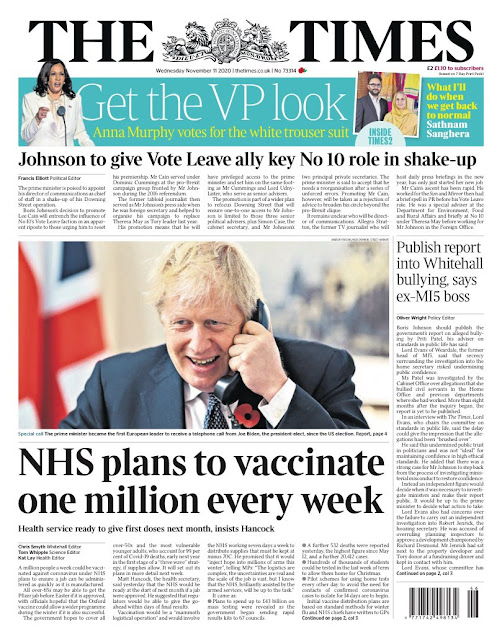 11 November
The number of deaths from COVID-19 in the UK exceeds 50,000.
13 November
Lee Cain, director of communications at Downing Street, announces his intention to stand down at the end of the year after reports of infighting in Number 10. Dominic Cummings, Boris Johnson's chief adviser and long-time "ally" to Cain, resigns shortly after.
14 November
The government commissions research into space-based solar power.

15 November
Boris Johnson is told to self-isolate by NHS Test and Trace after meeting MP Lee Anderson, who later tested positive for COVID-19. Downing Street says that the PM does not show any symptoms and will continue working from Number 10 whilst self-isolating.
16 November
The government orders five million doses of a new COVID-19 vaccine by American biotech company Moderna, after a phase III trial shows it to have almost 95% efficacy.
17 November
Labour readmits Jeremy Corbyn, following his suspension over antisemitism on 29 October. Sir Keir Starmer subsequently decides not to restore Corbyn's party whip.
A plan to ban the sale of new petrol and diesel cars from 2040 is brought forward to 2030 under Boris Johnson's 10-point plan to tackle climate change.
19 November
The government announces an extra £16.5 billion in defence spending over the next four years to "extend British influence".
Sources familiar with the Cabinet Office report that an inquiry into allegations of bullying by Home Secretary Priti Patel concluded that she broke the Ministerial Code.

20 November
Sir Alex Allan resigns as the Prime Minister's adviser on the Ministerial Code, after Johnson rejects his findings and expresses "full confidence" in Priti Patel.
Matt Hancock announces that vaccination centres are being established across the UK in preparation for a SARS-CoV-2 vaccine that, if approved, could begin distribution in December.
21 November
A Whitehall source reports that Sir Alex Allan had resisted pressure from Boris Johnson to make his findings from the inquiry into Priti Patel more "palatable".
23 November
Boris Johnson confirms that the lockdown in England will end on 2 December, with "tougher" three-tiered regional measures being introduced until March 2021.
AstraZeneca's AZD1222 vaccine, developed in collaboration with the University of Oxford's Jenner Institute and the Oxford Vaccine Group, is shown to be 70% effective in protecting against COVID-19. The efficacy can be raised to 90% if an initial half dose is followed by a full dose a month later, based on interim data.
24 November
Harry Dunn's parents lose a High Court battle against the Foreign Office over whether their son's alleged killer, Anne Sacoolas, had diplomatic immunity at the time of the road traffic collision in 2019.
The leaders of the three devolved nations of the UK agree with the prime minister on plans that will permit up to three households to form a "Christmas bubble" during a five-day period from 23 to 27 December, allowing them to mix in homes, places of worship, and outdoor spaces.
25 November
Rishi Sunak says that the "economic emergency" caused by COVID-19 has "only just begun" during his Spending Review announcement to the House of Commons, as figures from the Office for Budget Responsibility show that the economy is forecast to shrink by 11.3% in 2020, the UK's biggest economic decline in 300 years.
The Duchess of Sussex, Meghan Markle, reveals to The New York Times that she had a miscarriage in July 2020, which caused her "almost unbearable grief".
Baroness Sugg resigns from the Foreign Office, saying it is "fundamentally wrong" to cut the UK overseas aid budget.
26 November
Boris Johnson appoints Dan Rosenfield as his new Downing Street Chief of Staff, effective from 1 January 2021.
27 November
Following three weeks of lockdown in England, the R number for SARS-CoV-2 in the UK is reported to have fallen to between 0.9 and 1 for the first time since mid-August.
30 November
Retail group Arcadia, whose operations include Topshop, Burton and Dorothy Perkins, goes into administration, threatening 13,000 jobs.
Protein folding, one of the biggest mysteries in biology, is solved by London-based AI company DeepMind