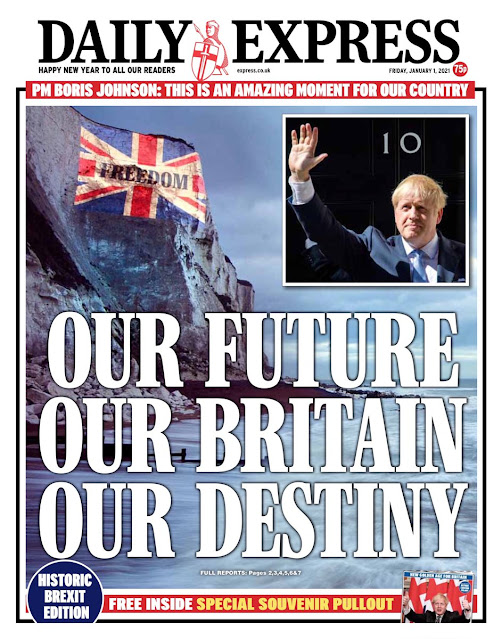 1 January
Boris Johnson has described the UK’s first full day of freedom from the EU as an “amazing moment for this country”. In his New Year message, the Prime Minister issued a rallying cry to Britons to make the most of independence from Brussels.
Nigel Farage declares that his people’s “Purple Revolution” against Brussels and its allies in the Establishment has finally won.
2 January
A record high daily positive test figure is reported at 57,725, as the new strain of the virus continues to spread. 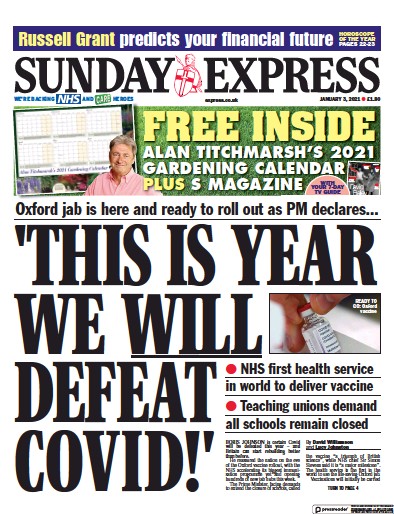 4 January
The UK's second vaccine against COVID-19, developed by Oxford-AstraZeneca, begins to be rolled out.
Most of England's primary schools reopen after the Christmas break, amid concerns over whether pupils should be returning during the current level of COVID infections.
The Joint Biosecurity Centre recommends that the COVID Alert Level is moved from 4 to 5, indicating a "material risk of healthcare services being overwhelmed".
Nicola Sturgeon announces tougher restrictions for mainland Scotland in order to contain the new strain of the virus, ordering the public to stay at home from midnight and delaying the return to school for pupils until February.
In a televised address, Boris Johnson announces a new lockdown for England, with people ordered to stay at home, and all schools and colleges to switch to remote learning from 5 January. This is expected to last until at least mid-February.
A new record high daily positive test figure is reported at 58,784.
The extradition of WikiLeaks founder Julian Assange from the UK to the US is blocked by a court in London, due to concerns over his mental health.
5 January
The number of new daily confirmed cases of COVID-19 in the UK surpasses 60,000 for the first time since the pandemic began, at 60,916. 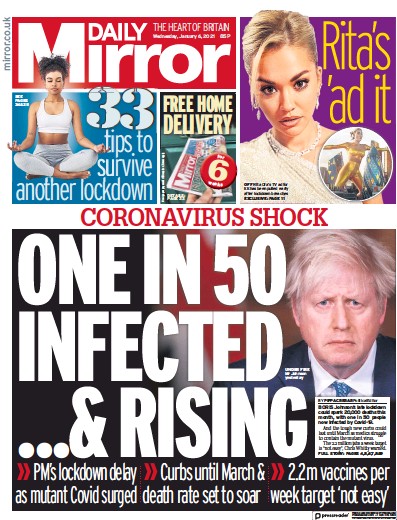 6 January
Education Secretary Gavin Williamson announces that GCSE and A-Level exams in England this summer will be replaced by teacher assessments, telling MPs he would "trust in teachers rather than algorithms".
Another record daily case figure is reported, with 62,322 new infections. The daily number of deaths from the virus exceeds 1,000 for the first time since April 2020.
7 January
Two anti-inflammatory medications, tocilizumab and sarilumab, are found to cut deaths by a quarter in patients who are sickest with COVID-19. 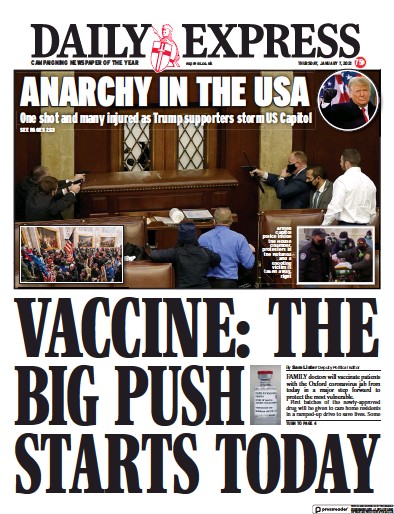 8 January
A third vaccine is approved for public use, made by US company Moderna and offering 94% protection from the virus.
A major incident is declared in London by mayor Sadiq Khan, stating that the spread of the virus is "out of control" in the capital.
The highest number of daily deaths since the pandemic began is recorded at 1,325. A new record high daily positive test figure is reported at 68,053.
Kwasi Kwarteng is appointed Secretary of State for Business, Energy and Industrial Strategy, replacing Alok Sharma who became the new President for COP26. Kwarteng is replaced as Minister of State for Business, Energy and Clean Growth by Anne-Marie Trevelyan, the former Secretary of State for International Development. He also became the first black politician of any party to have been appointed Secretary of State. 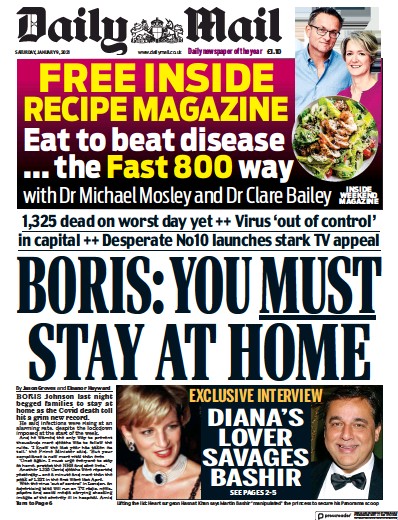 9 January
Buckingham Palace say that the Queen and Prince Philip have both received the first doses of their COVID-19 vaccinations at Windsor Castle.
10 January
Professor Peter Horby, chair of the government's New and Emerging Respiratory Virus Threats Advisory Group says on the Andrew Marr Show "we are now in the eye of the storm" and "it was bad in March, it's much worse now."
Health Secretary Matt Hancock tells the BBC that everybody in the top four most vulnerable groups will be offered a vaccine by 15 February, while every adult in the UK will be offered one by the autumn.
11 January
James Brokenshire resigns as Minister for Security. Michelle Ballantyne becomes the Leader of Reform UK Scotland.
Khairi Saadallah is sentenced to life imprisonment for the murder of three men and the attempted murder of three others during a stabbing in Forbury Gardens in Reading in June 2020.
13 January
The highest daily death toll since the pandemic began is recorded, at 1,564. 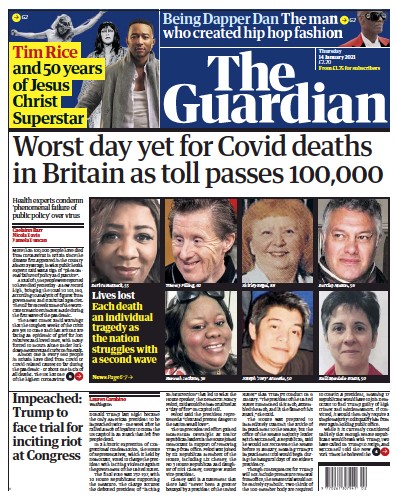 14 January
The government bans travel from South America and Portugal over concerns of a new Brazilian variant of COVID-19.
15 January
Boris Johnson announces that the UK is to close all travel corridors from 18 January to "protect against the risk of as yet unidentified new strains" of COVID-19, forcing all passengers travelling to the UK to produce a negative test result.
18 January
Figures compiled by Our World in Data (OWID) show that the seven-day average for this week in the UK is the highest death rate per million population from COVID-19 of any country in the world after an average of 935 daily deaths were recorded, the equivalent of more than 16 people in every million dying each day from the virus.
19 January
Based on testing for antibodies against SARS-CoV-2, the Office for National Statistics (ONS) estimates that 1 in 10 people across the UK had the virus by December 2020 – nearly double the November figure.
The highest daily death toll since the pandemic began is recorded, at 1,610.
A record daily high of 343,000 people are given a COVID-19 vaccination.
20 January
The highest daily death toll since the pandemic began is recorded, at 1,820.
A record daily high of 363,508 people are given a COVID-19 vaccination, bringing the total number of first doses so far to 4,973,248 and 464,036 second doses.
21 January
Glastonbury Festival is cancelled for the second year running as a result of the pandemic.
Arlene Foster announces that the lockdown in Northern Ireland will be extended to at least 5 March, adding that restrictions may have to remain in place until after the Easter holidays in April.
Storm Christoph: Five "danger to life" flood warnings are put in place across North West England and Wales after hundreds of homes are evacuated overnight due to widespread flooding caused by heavy rain and snow.
Former Brexit Party Member of the European Parliament Robert Rowland dies in a diving accident.
22 January
The R number is reported to have fallen to between 0.8 and 1 for the first time since the beginning of December 2020.
The latest analysis of UK data suggests that the new viral strain may be up to 30% deadlier.
Four men are jailed for the manslaughter of 39 Vietnamese migrants after they were found dead in a lorry container in Essex in October 2019.
25 January
Online retailer Boohoo acquires the Debenhams brand and website for £55m after the department store went into administration in April 2020, but it does not retain any of its stores, putting up to 12,000 jobs at risk.
26 January
Boris Johnson says he is "deeply sorry for every life that has been lost" as the number of deaths from COVID-19 in the UK exceeds 100,000.
27 January
Boris Johnson confirms that schools in England will not be able to reopen to all pupils after the February half-term as planned, but could do so from 8 March "at the earliest". He adds that he hopes a "gradual and phased" relaxation of COVID-19 restrictions can begin in early March.
Home Secretary Priti Patel announces that people travelling from "red list" countries considered to be COVID-19 hotspots will be required to quarantine in government hotels, while anyone wishing to travel abroad will need to prove that they are making an essential trip.
28 January
A third vaccine, Novavax, which will be manufactured in Stockton-on-Tees, is shown to be 89.3% effective against the virus in a two-dose regimen, following large-scale UK trials. 60 million doses are secured by the government.
29 January
A fourth vaccine, Ad26.COV2.S, is shown to be 66% effective against the virus in a one-dose regimen. With 30 million doses ordered, Matt Hancock tells reporters that it could "significantly bolster" the UK's vaccine programme if approved by the Medicines and Healthcare products Regulatory Agency (MHRA).
30 January
A record daily high of 598,389 people are given a coronavirus vaccination, bringing the total so far to 8,977,329.
31 January
Flu cases are reported to have fallen by more than 95%, reaching the lowest levels seen in 130 years, believed to be due to the COVID-19 lockdown and new health habits.