July 31, 2020
1 July
Prime Minister Boris Johnson denounces China's imposition of a controversial national security law on Hong Kong as a violation of its treaty with the UK, and announces plans to extend the British National (Overseas) rights of up to 3,000,000 Hong Kong residents born under British rule and open a route for them to become British citizens.
"No DSS" letting bans are ruled unlawful by a judge in York County Court. 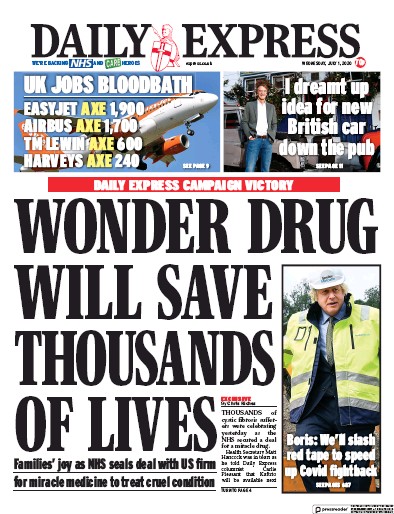 2 July
The National Crime Agency (NCA) reports that a Europe-wide operation lasting over three months, which involved the interception of messages on EncroChat, has had the biggest impact on organised crime gangs it has ever seen. More than 800 arrests are reported, including major crime figures, with over two tonnes of drugs, several dozen guns and £54m in suspect cash being seized.
4 July
A major easing of the lockdown in England – subject to modified physical distancing conditions – allows the reopening of bingo halls, cinemas, galleries, hairdressers, hotels, pubs, restaurants and theme parks. 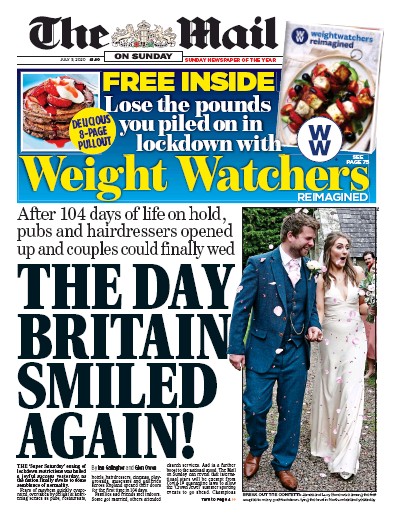 6 July
The government announces a £1.57bn support package to help British theatres, galleries, museums and other arts/cultural venues during the economic downturn.
The UK is warned by China not to interfere with its new Hong Kong national security law and to stop "making irresponsible remarks on Hong Kong affairs."

7 July
The British Government announces that it will resume arms sales to Saudi Arabia after a review finds "no clear risk" that they would be used in violation of international humanitarian law. Sales had been suspended in 2019 after a legal challenge by campaigners.

8 July
The Chancellor of the Exchequer, Rishi Sunak holds the July 2020 United Kingdom summer statement, also known as the Coronavirus mini-budget. It includes announcements that the Furlough scheme will be wound down gradually until finishing in October, the threshold for Stamp duty will be raised until the 31st March 2021 and a ‘plans for jobs’ package worth £30 billion will be implemented, as well as the ‘Eat Out to Help Out’ scheme, VAT cuts for the hospitality sector and over £6 billion in Green investment.
Chancellor Rishi Sunak unveils a £30bn spending package aimed at mitigating the economic impact of the COVID-19 pandemic, including a temporary reduction in VAT for the hospitality sector, a scheme to pay firms £1,000 for each employee brought back from furlough, a scheme to get young people into employment, and a temporary rise in the stamp duty threshold. 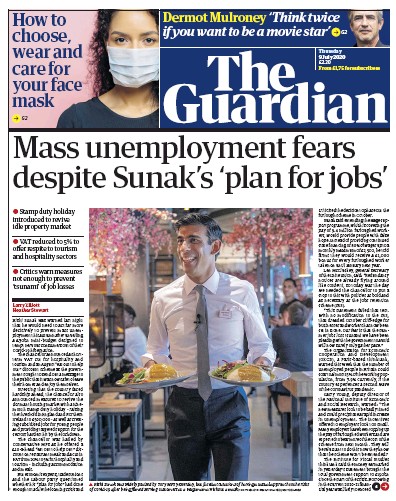 9 July
Boots and John Lewis announce job losses as a result of the pandemic, with Boots cutting 4,000 jobs, while John Lewis says it is shutting down eight of its stores, putting 1,300 jobs at risk.

10 July
Face coverings in shops and supermarkets become mandatory in Scotland.
Brexit: Plans are revealed for the emergency purchase of a 1.2m square foot "Mojo" site near Ashford, Kent, to be used for a new customs clearance centre for the 10,000 lorries crossing the English Channel to Calais every day.

11 July
Further easing of the lockdown is introduced in England, as outdoor pools and water parks are allowed to reopen, while indoor gyms, pools and leisure centres can reopen from 25 July.
Two members of Animal Rebellion are arrested on suspicion for criminal damage after releasing red dye into Trafalgar Square fountains.

13 July
The remainder of The Health Protection (Coronavirus, Restrictions) (No. 2) (England) Regulations 2020 comes into effect, allowing the re-opening of nail bars and salons, spas and beauty salons, massage parlours, tattoo parlours, and body and skin piercing services.
Work begins on the Viking Link, a 475-mile submarine power cable between England and Denmark, set to become the world's longest interconnector upon its completion in 2023.

14 July
British mobile providers are ordered to remove 5G equipment by Chinese firm Huawei from networks by 2027, over security fears.

15 July
The government announces that citizens of the EU living in England will be able to vote in the 2021 local elections postponed from 2020. 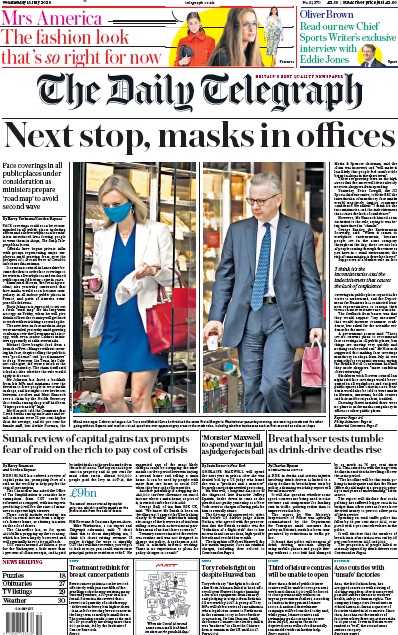 17 July
Boris Johnson announces further easing of lockdown restrictions, with plans for a "significant return to normality" by Christmas. The new rules allow people to use public transport for non-essential journeys with immediate effect, while employers will have more discretion over their workplaces from 1 August. From 18 July, local authorities will have the power to enforce local lockdowns.
Princess Beatrice marries Edoardo Mapelli Mozzi at a private ceremony at the Royal Chapel of All Saints, having been delayed by the pandemic. British Airways retires its fleet of 31 Boeing 747 aircraft, a move previously planned for 2024.

20 July
Clinical trials of the vaccine being developed by the Jenner Institute and Oxford Vaccine Group at the University of Oxford on 1,077 patients show that it appears to be safe, and trains the immune system to produce COVID-19 antibodies.
Foreign Secretary Dominic Raab announces that the government will suspend its extradition treaty with Hong Kong "immediately and indefinitely" over the controversial national security law.
MPs vote against New Clause 11, which intended to protect and maintain standards on animal health and welfare, food safety and the environment in the UK in any post-Brexit trade deal, by 337 votes to 251.
MPs vote against New Clause 17, which intended to protect the NHS and publicly funded health and care services in other parts of the UK from any form of control from outside the UK. 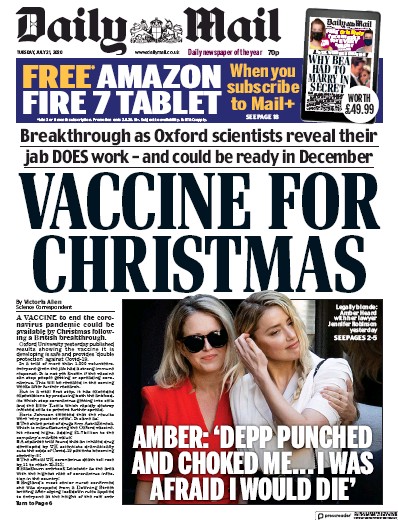 21 July
The Intelligence and Security Committee publishes a long-delayed Russia report on Russian influence over British politics. It shows that the government and intelligence agencies both failed to prepare or conduct any proper assessment of Kremlin attempts to interfere with the 2016 Brexit referendum.

22 July
The UK and US agree to amend an "anomaly" that allowed Harry Dunn death suspect Anne Sacoolas to claim diplomatic immunity. 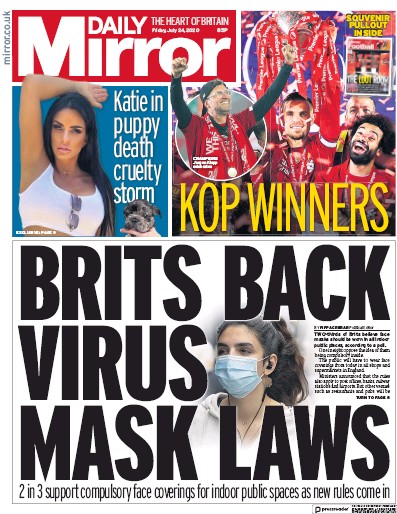 25 July
Following a rise in COVID-19 cases in Spain, and concerns of a second wave, the British government and the governments of Scotland, Wales and Northern Ireland, announce that travellers returning from Spain will be required to quarantine for 14 days from 26 July.
Public Health England warns that being obese and overweight puts people at greater risk of severe illness or death as a result of COVID-19. Indoor gyms, swimming pools and sports facilities in England reopen in the latest easing of the lockdown.
Police investigate grime artist Wiley over a series of antisemitic posts on his social media accounts, in which he describes Jewish people as "cowards" and "snakes" and compares them to the KKK. Home Secretary Priti Patel later probes Twitter and Instagram on their delay in removing the "abhorrent" posts.

27 July
The UK's Chief Veterinary Officer confirms that SARS-CoV-2, the virus responsible for COVID-19, has been detected in a pet cat – the first known case of infection in an animal in the UK.

The government announces a ban on junk food advertising before 21:00 for the whole UK, along with restrictions in England on how foods high in fat and sugar can be promoted in-store, and new rules for displaying calories on menus.

29 July
The government signs a deal with GSK and Sanofi to provide 60 million doses of their potential COVID-19 vaccine. This follows three previous deals with other companies, taking the UK's potential vaccine availability to 250 million doses. 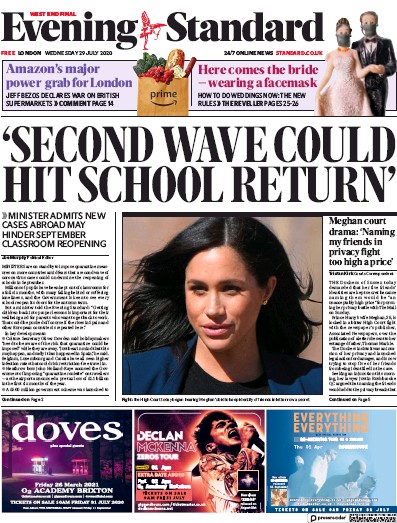 30 July
The isolation period for those with COVID-19 symptoms is extended from seven to 10 days, in line with guidance from the World Health Organization.
Former Conservative MP Charlie Elphicke is found guilty of sexually assaulting two women, in 2007 and 2016. His wife Natalie Elphicke, Member of Parliament for Dover, says the verdict has ended their marriage.
With a series of opinion polls showing majority support for Scottish independence, Jackson Carlaw resigns as Leader of the Scottish Conservative and Unionist Party after only six months in the job.

31 July
A further easing of the lockdown in England, due to begin on 1 August, is postponed for at least two weeks, because of an increase in SARS-CoV-2 cases.
The UK experiences its hottest day of the year so far, with temperatures of 37.8 °C (100.04 °F) recorded in London.
The UK records its first case of babesiosis, a rare tick-borne disease.