Chelsea FC owner Roman Abramovich has been sanctioned by the UK government as part of its response to Russia's invasion of Ukraine.

He is one of seven oligarchs to be hit with fresh sanctions, including asset freezes and travel bans.

Prime Minister Boris Johnson said "there can be no safe havens" for those who have supported the invasion. 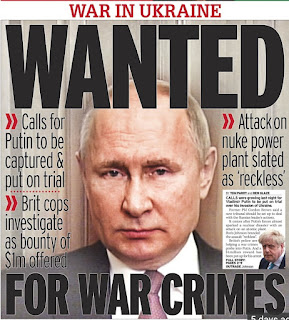 Chelsea FC cannot sell any more tickets for games, its merchandise shop will be closed, and it will be unable to buy or sell players on the transfer market.

The government said it would issue a special licence that allows fixtures to be fulfilled, staff to be paid and existing ticket holders to attend matches.

Ministers have come under pressure to sanction Mr Abramovich, who said he had made the "difficult decision" to sell Chelsea FC earlier this month.

The football club is among the assets frozen as part of the sanctions against Mr Abramovich and its sale has stalled.

The government would consider allowing Mr Abramovich to apply for a special licence to sell the club, providing he can prove he would not benefit from the sale.

Mr Abramovich, 55, is alleged to have strong ties to Russian President Vladimir Putin, which he has denied.

The government says Mr Abramovich, who has an estimated net worth of £9.4bn, is "one of the few oligarchs from the 1990s to maintain prominence under Putin".

Mr Abramovich has stakes in steel giant Evraz and Norilsk Nickel. He sold a 73% stake in Russian oil firm Sibneft to state-owned gas titan Gazprom for £9.87bn in 2005.

He is believed to own a number of properties in the UK, including a 15-bedroom mansion at Kensington Palace Gardens in west London, reportedly valued at more than £150m.

Many of the front pages show an injured pregnant woman being carried on a stretcher outside the destroyed hospital in Mariupol in southern Ukraine.

"Aiming for mothers and babies" is the headline for the Times, which reports a large missile fired by a Russian jet missed the children's and maternity wards by just a few feet. Officials tell the paper there are no reported deaths, despite initial concern about people being trapped in rubble. 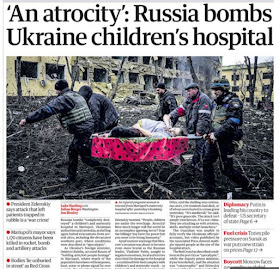 The Daily Telegraph reports that most of the pregnant women were hiding in the basement at the time of the strike.

There's outrage across the papers. "Depraved" is the Daily Mail's headline - the same word used by Prime Minister Boris Johnson to condemn the attack.

The Sun accuses Vladimir Putin of plumbing "sickening new depths", while the Daily Mirror describes the airstrike as "merciless" and "barbaric".

An editorial in the Daily Express says the images will last in the consciousness long after the awful events, shaming Russia for generations.

The Telegraph leads on fears among Western officials that Russia is preparing to use chemical or biological weapons. The paper says Mr Putin has become increasingly frustrated by the resistance mounted in Ukraine and may turn to extreme measures.

Analysts are reported to be seeing echoes of Moscow's tactics in Syria, where in 2015 the city of Douma was attacked with chemical weapons.

Conservative MP and former soldier Bob Seely tells the Telegraph such an attack in Ukraine would be disastrous. Chlorine and sarin gas are heavier than air, he explains, and will seep into basements and metro stations where civilians are sheltering.